“I’m not sure I would be where I am today without the guidance and influence of my teachers at Luther Memorial.”

Aric Olsen’s (LMS ’18) love for music was first nurtured at Luther Memorial where he learned to play the violin and was a leader in the school’s orchestra, even serenading guests at the school’s annual fundraiser one year.

During his years at St. Edward High School in Cleveland, Aric added saxophone player to his musical resume and enjoyed dancing on the field at football games and making friends among his marching and symphonic band classmates.

He kept his violin in tune also, playing in the orchestra and the pit orchestra for the school musicals, including Pippin in 2022.

Aric will graduate from St. Edwards in May ’22 with plans to attend college. He has been accepted at several out-of-state schools which appealed to him more than staying local. “I’m ready to see the U.S. and venture away from home,” he says.

Though music will always be a hobby, he has no plans to major in music in college, but instead is open to exploring different career paths. One of those paths may be computer technology, which was a focus of his studies in high school.

As he reflects on his years at Luther Memorial, Aric believes that LMS helped him develop into the kind of person he is today.

“I’m not sure I would be where I am today without the guidance and influence of my teachers at Luther Memorial,” he says. “Their influence helped shape my confidence level and overall demeanor.” He says his teachers taught him self-control in both actions and words.

“I feel lucky to have LMS where my boys can get a dose of the world in their own class every single day.” 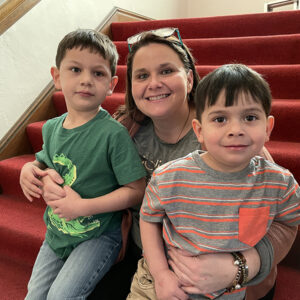