“Whatever he does, he will do his part to contribute to the U.S.”

Nar Pradhan is well-known among Cleveland’s Nepali refugee community. A decade ago, he was the new refugee, struggling to make a life in the U.S. Now he helps others find their way in a new country.

As a leader in his community, Nar has brought a number of refugee families to Luther Memorial, even before his son Shayne was old enough to be enrolled. He says he appreciates the school’s discipline and strong educational foundation. Shayne is now a 5th grader at LMS’ West Campus. With an outgoing personality and the sweetest of smiles, Shayne has many friends and, like his father, is always the first one to help others.

Nar says he and his wife do not care what Shayne grows up to be as long as he is useful to his country “He could be a soccer player, or maybe a doctor. It doesn’t matter,” says Nar. “Whatever he does, he will do his part to contribute to the U.S.”

“I'm convinced we wouldn't have gotten this kind of support anywhere else." 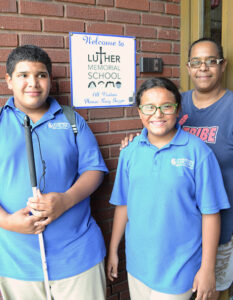